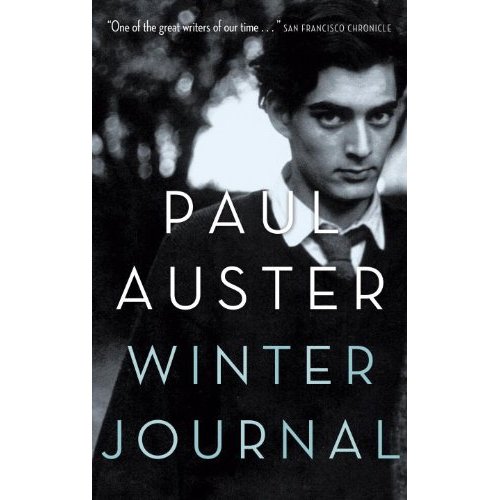 Posted by Justine Solomons on 27 September 2012, in Recommendations

Or try my favourite book of his: In the Country of Last Things

I'm a huge Paul Auster fan and was excited to be given a proof of Winter Journal by Faber at this year's London Book Fair. My love for Auster is so intense that, a bit like anyone you love, you forgive them their occasional abuses because you love them so much. There have been a few books over the years that I have liked less then others but I forgive him those for his astonishingly good books such as 'In The Country of The Last Things' (which is pretty much my favourite book ever). Thankfully, I needn't have worred, Auster took very good care of me with Winter Journal.

This book was written over Auster's sixty-fourth winter.  Deeply personally but written in the second person we the reader flit back and forth over time as if we were living Auster's experiences. This book doesn't have a narrative arc or chapters or even sections, we only become aware that time has passed towards the end when Auster notices that New York is still cold in March.  However once we let go of a need for story we learn so much about Auster, including key emotional experiences such as the effect his mother's death had on him and also how watching a dance performance just before his father's death freed him from a crippling writer's block.  In addition to these key experiences we also learn so much more about Auster for example: about his relationship with his body including, the last time he was 'permitted' to wet himself as a child;  his passion for women, including the many prostitutes he slept with, and then his key relationships.   These relationships include his first wife, the writer, Lydia Davis, whose writing style is definitely mirrored here with his intense interrogation of some subjects, and then the deep and profound love he has for his current wife, novelist Siri Hustvedt.

We also learn about all the places he's lived and his constant battle, despite on occasion limited resources, to keep writing.  The writing process is a key theme of this book for me, and as it is written in the second person one really feels as though Auster is writing this book for you, whoever you are, as if you were a writer.  One feels as though we are all connected to Auster, who describes himself as an 'Everyman' -  to use a line of Walt Whitman's, Auster 'contains multitudes'.    Also like Whitman, writing for Auster is a physical activity, he explains how important walking is for him, for that is where his ideas start to percolate, he tell us, 'writing begins in the body, it is the music of the body'.  Well I for one could listen to his music every single day of my life, I truly believe this man is a genius.

If you are a Paul Auster fan, enjoy beautiful prose, or want to learn more about being a writer, I suggest you make you sure you read this book.