Report: What are the Most Effective Methods to Market your Books? 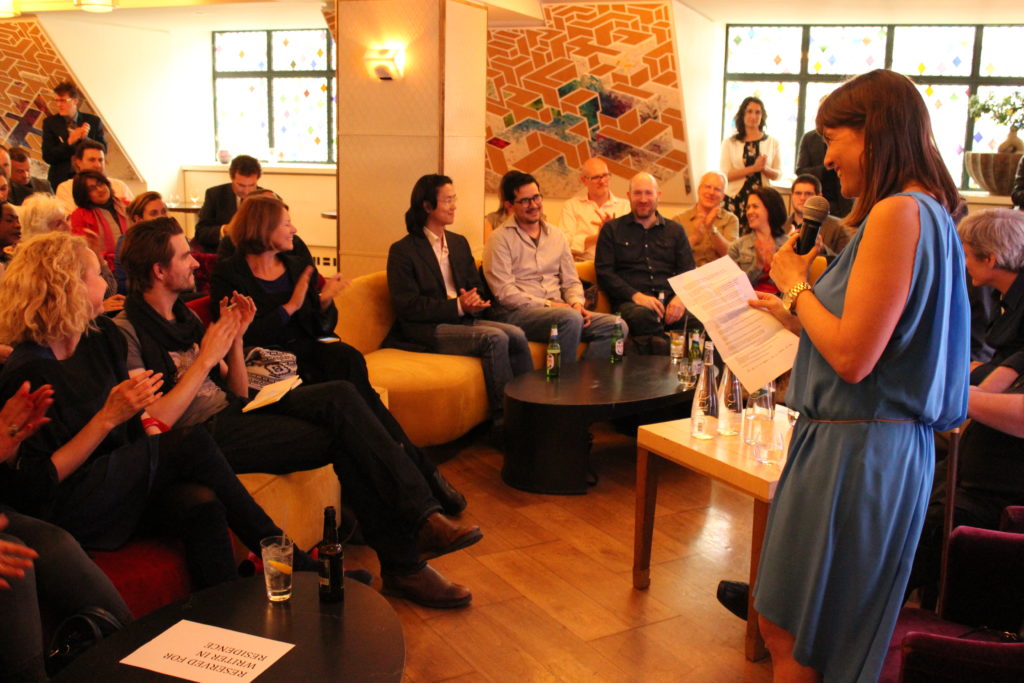 Posted by Justine Solomons on 19 June 2014, in Event reports, News

Sparks flew at June’s Byte The Book event, much to the delight of the packed crowd at The Ivy. Locking horns on the topic of effective marketing strategies were publishing consultant Chris McVeigh, Marketing Director at Orion Books Mark Rusher and bestselling self-published author Mark Edwards.

Host Justine Solomons thanks June sponsors Autharium (sitting to the right in the front row).

Mark Edwards opened the floor by reflecting on how he and his writing partner Louise Voss have managed to sell over 300,000 eBooks between them, without the assistance of a publisher. He stressed that authors must approach marketing professionally in order to master its two most vital elements: 1) Finding your audience, and 2) Getting in front of them. He recommended that writers identify similar authors in their genre and find ways to connect with their readership, perhaps via reciprocal guest-blogging. The reader cross-pollination that tends to follow from this process can help new authors appear in ‘If you liked this…’sections, and as a result effectively “follow other books up the charts”. Experiment and innovate constantly, Mark added, evaluating what works and what doesn’t (Mark noted that subtly adjusting the amount of peril in his online copy, for instance, caused his book to shoot up the charts).

Mark Rusher, who recently won a Bookseller Award for his marketing of Gillian Flynn’s Gone Girl, added that in the current climate you need an extremely compelling central idea to rise above the noise. Gone Girl resonated widely with its central premise that “you can never trust the person you live with”, and readers were hooked from the start.Interestingly, Gillian herself shies away from social media, but her publishers worked tirelessly to ensure that every opinion former in the industry was talking about the novel. Even when it sold in huge quantities - in fact, especially when it did - the relentless marketing continued apace because, perhaps dishearteningly, it will always be easier to sell 200,000 copies of a smash hit than even 10,000 copies of an unknown debut. In all, nine separate print editions of Gone Girl were released to the public, keeping them interested, and keeping them buying.

A full crowd listening to the panel.

It was when Chris McVeigh took the floor that things began to get heated. Chris slammed what he saw as a lack of strategy among mainstream publishers, criticising them for publishing too many titles and employing a “crapshoot approach”to marketing (i.e. treading the same ground with every book and occasionally lucking out on a hit). He added that it was easy for Orion to impose a “retrospective narrative”of success on Gone Girl, but in reality they were simply repeating the same tired process they employ for every release. Publishers, he emphasised, need to grasp simple marketing platforms such as SEO, citing the rather alarming fact that if you Google “poetry”you won’t find a major publisher’s website until at least page four.

There were loads of questions from the floor.

Top marketing tips that closed the discussion included the importance of getting your pitch right, analysing your sales data, finding what works for you and rejecting what doesn’t (if you hate Twitter, for example, don’t spend hours forcing yourself to use it - it will show in your content). Chris summed up by advising authors that, with marketing, “you either live it or you don’t”. No one can tell you the right way to market your book, because the story’s different every time.

If you enjoyed this report why not join us at The Club at The Ivy on Monday 14th July 2014 .