Emma is a wild swimmer and life-long hobbyist writer specialising in narrative non-fiction.

Her current book is an exploration into the primal powers of femininity and water, community and nature, with stories gathered from around the world that demonstrate the power of connection and humanity in an increasingly crazy society. Interweaving autobiographical material from the author's life with biographical stories from women she has spoken and connected with, the  narrative flows like water as it unfolds in ordinary and extraordinary ways, taking shape through connection and shared story-telling.

This is Emma's debut book, and she is delighted to be working with an agent aiming for publication in January 2024. Future offerings include tales from Ireland, the land of her ancestry, and a collection of soul stories showcasing the astonishing beauty and simplicity of people’s actions in the everyday.

Emma can generally be found swimming in rivers in a bikini in the snow, drinking tea with friends, or embarrassing her teenage children with her compulsion to talk with anyone she meets.

Nadia is an author and bookseller. In 2002, she co-founded Diwan, a small corner bookstore in Cairo. Over the last twenty years, it has grown into Egypt’s fiercely independent leading chain of bookstores, with 10 branches, and a publishing house.

Nadia’s work as a bookseller and entrepreneur has been covered in the Washington Post, Time, Monocle, and Business Monthly, among other publications.

She lives in London with her two daughters and Cleo, the stubborn French bulldog.

I am an author, journalist and freelance editor with 5-years experience reviewing books for regional and national press (commissioned by The Press Association). I am currently seeking representation for my second novel, In Search of Peter Pan, which follows MC Jen as she chases the sold-out Kate Bush tour across Europe in 1979.

Amy is Sales Manager for The London Book Fair, she manages the Trade, Academic, and Professional publishing areas of the Fair and has previously managed the International Rights Centre. You can contact her on amy.walker1@rxglobal.com

The London Book Fair is the global marketplace for rights negotiation and the sale and distribution of content across print, audio, TV, film and digital channels. The Fair takes place in April at Olympia, West London, covering all aspects of the publishing industry.

Emma's debut book 'What Does It Matter?: Live with Less Stress and More Joy' is due to be released in early 2023. Published by Post Hill Press, Nashville and New York, and distributed worldwide by Simon & Schuster. The Founding Director of Solomon Hunt is in much demand as a consultant, public speaker, musical director, and songwriter. Emma was awarded an ESRC scholarship to study at Cambridge University where she gained her MPhil in Educational Research.

As an innovation strategist and leadership coach, Emma designs and delivers bespoke programs for a range of clients across the public, private, and not-for-profit sectors, from tech start-ups to global charities and FTSE 100 companies.

Emma has performed and conducted in premiere venues across the UK, Europe, and USA. She is an accomplished songwriter and her work is regularly performed and aired worldwide. She lives in Kent, England with her husband and two children.

Marian Allsopp hopes to publish her first short novel, based largely on her own life experiences: a long marriage lived in a small university town; thirteen years of domestic grind with three children; fifteen years engaged with social services for children, partly as family therapist in an adolescent psychiatric unit, partly studying social work decision making in Child Protection;  part time teaching at Oxford Brookes University; involvement in a  mental health work rehabilitation  project as a trustee and chair and, finally, studying for a doctorate at the LSE and publishing a book on the emergence of the concept of psychic harm, or trauma as metaphor, in various parts of the "psy" professions.

Decima Blake, author of the DS Hingston series, has a long-standing interest in child protection and is deeply passionate about child victims of crime. Hingston's Box was published in 2016, followed by Hingston: Smoke and Mispers in 2022. Decima combines historical research, real-life police procedure and a touch of spookiness to provide readers with an immersive experience as they join Hingston on his race to solve cases involving missing persons and murder. A percentage of royalties are donated to the charity Embrace Child Victims of Crime.

Detective Dachshund and the Fluffy Thief is written and illustrated by Decima Blake. She created Detective Dachshund to entertain audiences of all ages with humorous stories and to inspire young readers to explore the fun of writing in rhyme. A percentage of royalties will be donated to Battersea Dogs and Cats Home.

I’m based in London, UK and work in the Entrepreneurial space.

I’m interested in the intersection and potential across business, technology, governance, leadership and people. I’d categorise myself as a synthesizer - I'm good at seeing patterns, connections and underlying discourses. I always like meeting new people and hearing ideas, so feel free to reach out.

Editor/Author/Librettist/Musician. An Australian/British creative with many incarnations: Rebecca has authored two as-yet unpublished novels (one of which is draft 2 complete) and co-written an illustrated children's book series upon which she has composed and recorded 13 songs for the musical Paris Bear.

In the music world, she is also known as FREYjA, an award-winning singer/ songwriter/ recording artist who has performed at venues and festivals worldwide, including Montreux Festival, solo before 47,000 at Stadium Australia, Woodford Festival and more.

In Sydney she had her own radio show on RRR. She is also a choir director, actress (Sydney Theatre Company and various TV), VO artist, librettist.

Rebecca lived in Southern Ecuador, Kyoto and Paris, which she still regards as her second home. She is currently moving from London after 13 years, to East Sussex.

As Marketing Manager at Lume Books, Aubrie is responsible for the strategic planning and implementation of digital marketing campaigns. Originally from Washington, D.C., her career began in film production in Los Angeles in 2008. Since then, she's been fortunate enough to work across many different industries in a variety of senior marketing roles. In 2017, she relocated to London to pursue an MA in Creative and Life Writing at Goldsmiths College, where she is currently working towards a doctorate.

You can get in touch with her via aubrie@lumebooks.co.uk 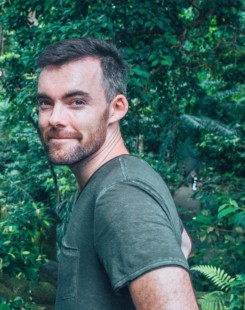